Obnoxious, loud, and most certainly black was the perception that that America saw of the Stanford graduate Richard Sherman after his postgame rant regarding a member from the other team. The all-pro Seattle Seahawk was branded as “hood” and a “thug” after expressing such volatile emotions from the highly anticipated NFC Championship game on Sunday, January 19th. While this may be unusual for a typical athlete, this scenario is usually expected from black male athletes due to their preconceived identity often times being “barbaric and wild”. And while wittingly enough these accusations (Him being a hoodlum thug) is expected and is a sheer instance of him reinforcing the “angry black man” stereotype, he unintentionally as a result challenges the idea of the athlete not only being a representation of place, idea, or country( or city in this case), but rather he represents a culture of people that have been historically displaced since the very beginning of America and its foundation of slavery. So, although it is an obvious (obvious meaning stereotypical) “representation” of the black male psyche,  his actions serve not only as mere reaction to the media, but in essence a political advertisement that undoubtedly continues show the devaluing and silencing of the black body.

Although the black body now occupies a central position within both social theory and contemporary media culture, attention to representation allows us to map dominant ideologies as they circulate through culture and reproduce themselves as sites for the interpellation of individuals into specific gendered, classed, and racialized subjectivities. As stated in the book Sports Matters: Race, Recreation, and Culture, the author Amy Bass states that black athlete serves as a racialized subject, occupying and a crucial place in Americas’ imagination. Additionally, because Bass argues that although the Olympic charter emphasizes individual athleticism, each athlete physically embodies a nation’s collective identity in global competition. With that being understood, it is only seen that in this instance, for example the 1968 Olympics, that this is only true only if the black athletes express themselves in a positive way. The 1968 Olympics Black Power salute was an act of protest by the African-American athletes Tommie Smith and John Carlos during their medal ceremony at the 1968 Summer Olympics in the Olympic Stadium in Mexico City. As they turned to face their flags and hear the American national anthem (The Star-Spangled Banner), they each raised a black-gloved fist and kept them raised until the anthem had finished. As a result of their actions, they were both ridiculed for their behavior and deemed as outsiders from the American community.

So is Richard Sherman the modern day Tommie Smith and John Carlos? In a way, yes he is. Although his actions were not politically charged to positively change the social justice system of America, he is a mere representation of the devaluing and silencing of the black male athlete. Over forty years later, the same cultural misrepresentations of African Americans are still in place due to their ability to express themselves. In the article, ‘Race’, Representation and the Sporting Body, the author Ben Carrington discuses the issue of how “over expression and hyper blackness leads to the demise of Africana Americans.  The author argues that the spectacle of ‘hyper blackness’ itself unwittingly reveals the psychic investments that such racialized identifications produce the projecting colonial discourses about race that as a result forwards into the post/colonial present. It is also suggested by the author that fantasies about the excesses of black sexuality continue to exercise a hegemonic role in the representation of Blackness and as a result, the black (male) body has come to occupy a central metonymic site through which notions of ‘athleticism’ and ‘animalism’ operate. Conclusively, Carrington claims that these tropes of blackness provide the discursive boundaries within which the black subject is still framed. While all such is true, this brings into question of why hegemonic ideologies are continuously perpetuated and what value will the black body ever have. 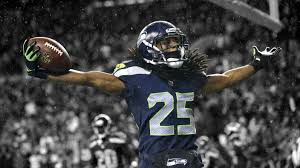 This entry was posted in Media Analysis, Stereotypes. Bookmark the permalink.

1 Response to The Sherman Olympics