Throughout my entire life I have always been the player; the one taking the field, getting scraped up, and soaking in the information coaches two or three times my age were trying to feed me.  Many times I wondered, what would it be like to be them? How would I do that differently?  Well a couple weeks ago, as I sat on my couch watching ESPN’s Baseball Tonight with my roommates, they asked me questions like, “I don’t understand how you can hit the ball?”, or “Why do they hold the ball like that?”  As I tried to answer these questions while still laying on the couch, I realized that it would be a perfect opportunity to give them a crash course on the sport I love.  Within the next couple days I taught them the bare essentials to throwing and hitting.  I decided not to teach them fielding as we did not have the proper “safety gear” to do so.  As we engaged in baseball activities, I realized that baseball is a very structured and habit-based sport.  For a full functioning performance, whether throwing, or hitting, it requires your body to act like a machine.

On a Monday afternoon, when there was finally decent enough whether in San Diego, my roommates, Nick, Dustin, Kevin, Kelvin, and I walked over to Rimac Field so I could give them the rundown on proper throwing techniques.  The idea that I instilled in their heads was that they needed to be comfortable, comfortable within their motions while still doing them properly.  The body as a machine philosophy popped into my head as I explained the mechanics of throwing a baseball.  Like a machine, to throw a baseball properly and accurately, you needed to use different muscles, arm rotations, and steps just as a machine would use different codes and gears to operate.  When it comes to throwing, grips and arm motions are key.  I explained to them that the most basic and comfortable way to hold a baseball is the four-seam fastball grip, as seen below.

This grip would allow for the most control over the baseball, and through practice, you can train your hand to apply this grip to the ball almost instinctively.  Obviously, it would not happen with just one practice, but making them take their time to put their fingers in the four-seam grip would help.  Next, I moved onto explaining a proper way of throwing called the cobra throwing motion.  This motion first required the thrower to aim their glove hand in the direction they wanted to throw the ball while creating an ‘L’ shape with their throwing arm.  Below is a sketch as to how the motion should look.

From here, I explained to my roommates that their throwing arm will follow through in an overhand motion, releasing the ball as your hand passes your head.  After releasing, your arm follows through to the other side of your body for a complete throw.  This process was repeated and after about 35 minutes, they were getting the hang of it.  Like the Zander machines, as mentioned in the article, “Measuring Mechanical Strength” by Carolyn Thomas de la Pena, by putting the body through a strict mechanical process instills a mental boost, in this case, confidence in my roommates as they repeated the cobra motion (83).  I then realized that confidence and mechanics would have to play a large role when it came to hitting.

Teaching hitting to my roommates was a lot more confusing and difficult than throwing.  Growing up, I did not become a decent hitter until I started high school and by then, I had been playing little league for a few years.   With my experience, I knew that them not hitting anything was possible.  I broke down the basic elements of hitting as simple as I could to Dustin and Nick, they were the only two available to practice hitting.  I told them that hitting takes a lot of motions happening all at once.  After about a 30 minute lesson on hitting/swinging without any baseballs, it was time to step into the batting cage.  As imagined, the first dozen or so swings were unsuccessful, and their batting stances were awkward and stiff.  I reinstalled in their heads that comfort is key to batting, then all the other stuff comes in.  After a while they began to get the hang of it and were hitting the ball.  As I watched Nick and Dustin swing, and go through the motions, it occurred to me how intense of a regimen it is for professional baseball players to hit the ball.  The regimen had to consist of 1000s of hours in a batting cage, changing and tweaking parts to their swings.  Hitters, like those working on Zander machines, constantly saw themselves as different aspects of the machine, or their swing.  de la Pena explains that those working on Zander machines created energy within their bodies as they focused on the machine (87).  Hitters do the same thing when swinging, as they focus on certain aspects of their swing producing energy in their follow through; and like the result of the Zander machine, hitters gain “physical expansion,” allowing them to become better, and more confident (87). 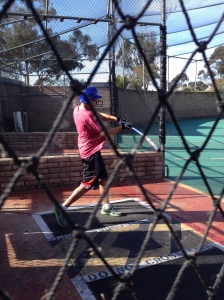 (Pictures of Myself, Nick, and Dustin going through different motions of swinging.)

After teaching my roommates basic fundamentals to baseball, the realization of how complex and difficult it is settled in.  As someone who grew up playing the sport and dreaming of how amazing it would be to play on a professional level, my fantasies quickly drifted from me.  The effort required to produce at such an advanced level makes me appreciate even more the abilities and focus these athletes possess.  It also gives me insight as to why doping, especially in baseball, is so common and does not seem to be going away.  My roommates told me they felt the pressure and the grind of baseball, and they only “practiced” twice!  The scary part is, this feeling is mutual amongst all sports, and this pressure to be a successful machine is enough to make the most strong-willed athletes seek out alternate methods for success.