Running is something that I have discussed in previous blogs about, how it was a huge part of my life for a long time up until this year.  Yes, I am still running here and there but definitely not how I used to when I was a competitive athlete.  Lately, I have been trying to engage myself in running again around my work and school schedules and it’s been mentally, emotionally, and physically draining.  Having been a competitive athlete for so long and than putting the spikes aside for the many months that I have, it is extremely hard getting myself back into it.  For starters, everyone knows how terrible getting back into shape can be especially building back a strong endurance.  Not only that, but my entire last season I nursed a hamstring injury that was a battle for me the whole year and now that I am off, the shortest run or hike places a lot of strain on it since I’ve been so inactive running wise.  While I’ve been working out, I have been feeling tired and sore in my hamstring right around my 30min marker on a run.  I love running in the morning or when it’s cold because when it’s hot out it makes me feel THAT much more out of shape.  I usually wear shorts and a top since I get warmed up faster than most, but during my run I at least try and stretch half way through to prevent any further issues.  I have unfortunately not been very consistent running which would absolutely make my life easier if I were because the more persistent you are with a lot of sports, the easier it gets.  What I’ve been trying to do on the days I’m really sore, is at least go for a walk, rollerskate, or stretch the next day to loosen up my muscles.

I found an article on the Disabled Sports USA website about running and they discuss how starting slow is the key.  For anyone with or without a disability whether that’s a prosthetic leg, or a strained hamstring… going big to get back in it will land you worse off than you were before you started.  I have learned as a runner, you need to set goals for yourself that will allow you to achieve something even if it’s an easy goal like, “stretch at least once a day.”  Lately, I have been setting goals for myself like, do core and squats at least 3 times a week.  This, article on the Disabled Sports page also brings up, “A beginner should also go for time instead of distance.  Instead of setting your goal on a certain mileage, it’s more effective to increase time.  If you’ve worked up to running 15 min., set a goal for 30.”  I think this is hard for a lot of athletic people to do because sometimes feeling like running for time won’t feel as rewarding because you can’t say, “I just ran 6 miles,” but instead of something like, “I just ran 30 minutes.”  I am extremely guilty of this and I think this article does a really good job pointing out little things like that that can help you become a stronger runner with more rewards.

On the disabilities side of it, I have recently geared my focus of communications towards an emphasis in disabilities and I have been taking some time to figure out where I can go with it.  I am trying to become more involved not only as a runner again, but know as much about disabilities as I can in order to understand their playing field, the interaction between myself and them, and the social aspects of their lives that are just like mine.  While I’ve been looking into disabilities, it’s become very apparent to me that such a large part of our society has been blinded to the abilities that these men, women, and children have and that their drive is the same if not more than your neighborhood runner, to be outside enjoying the thrill of exercise.  I live right on Mission Bay and while I’ve been running, I have been seeing a huge group of people from around the ages 12-70 in wheelchairs working out around the bay.  You can see it in their eyes and the way they push and pedal with their arms how strong they feel in that moment.  It is wild to think about when you watch them workout, to try and understand the level of pain or discomfort they feel as opposed to my everyday nagging injuries.

I’ve learned that although you shouldn’t separate or compare your problems to those with barriers in their lives with disabilities, but in a sense you should to understand how strong these people really are.  Seeing and learning about all of these men and women have made me want to push farther past my nagging injury and work harder and bettering myself just like they are doing something we all love, RUNNING. 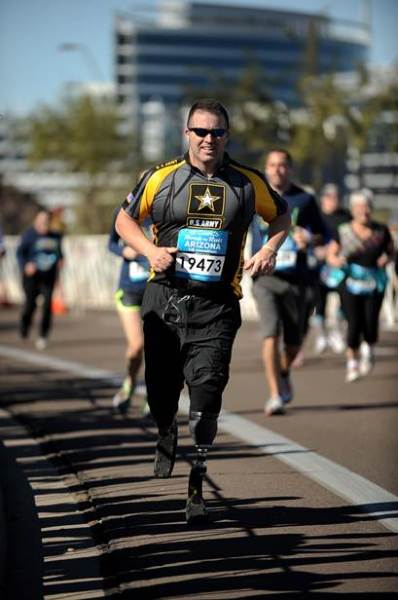 This entry was posted in Learning through Doing and tagged disabilities, injury, muscles, pain, persistence, running. Bookmark the permalink.

2 Responses to Running Made Possible